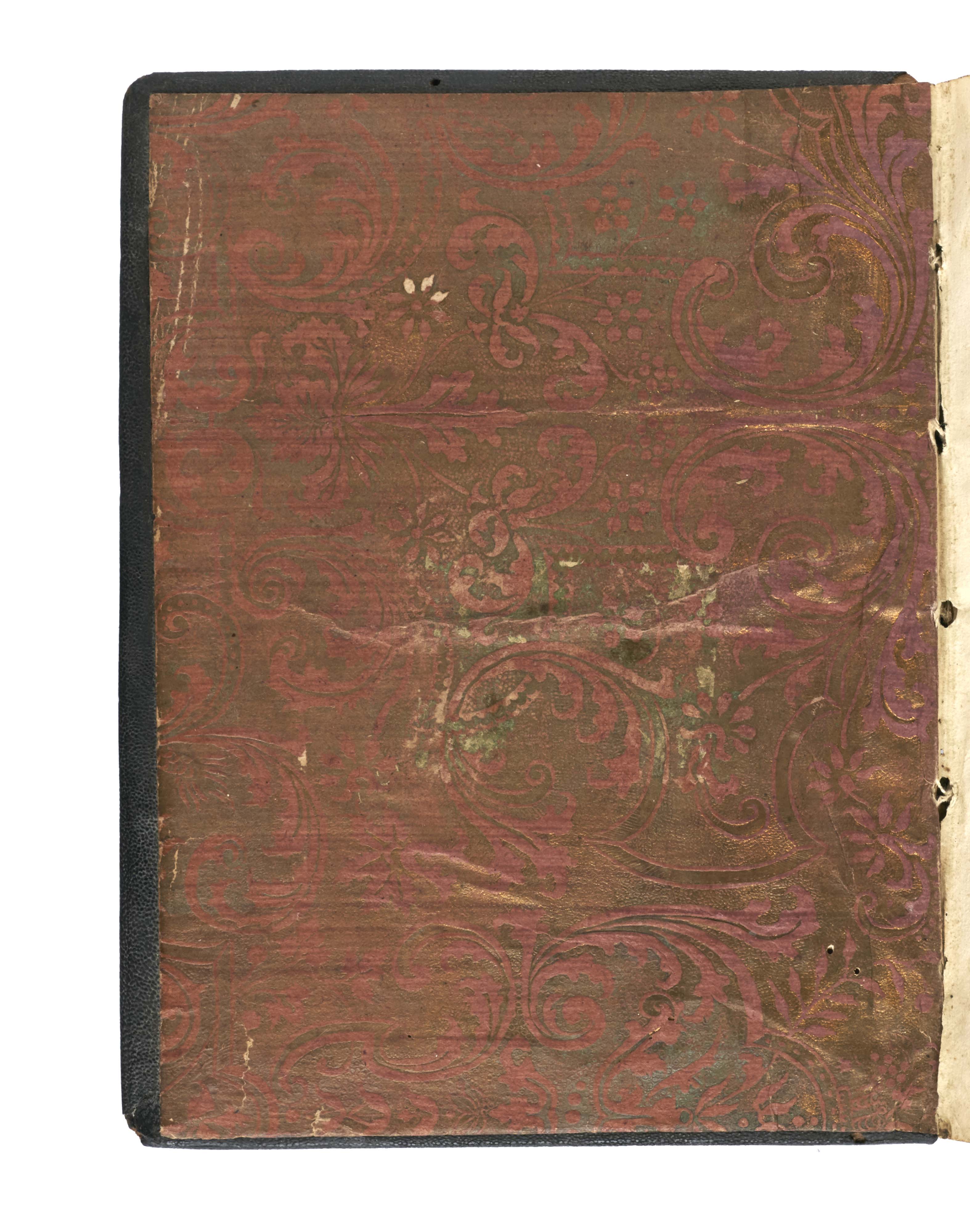 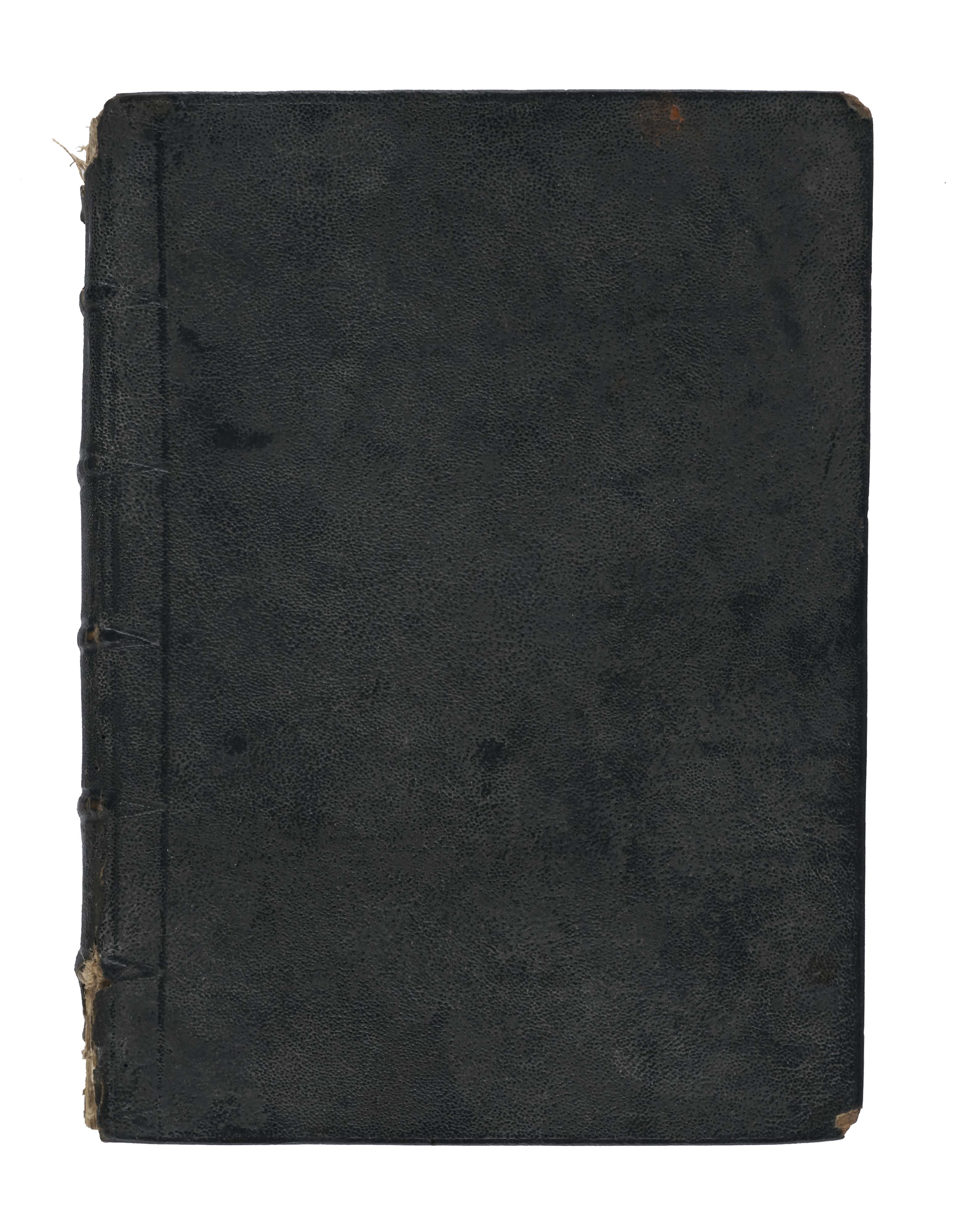 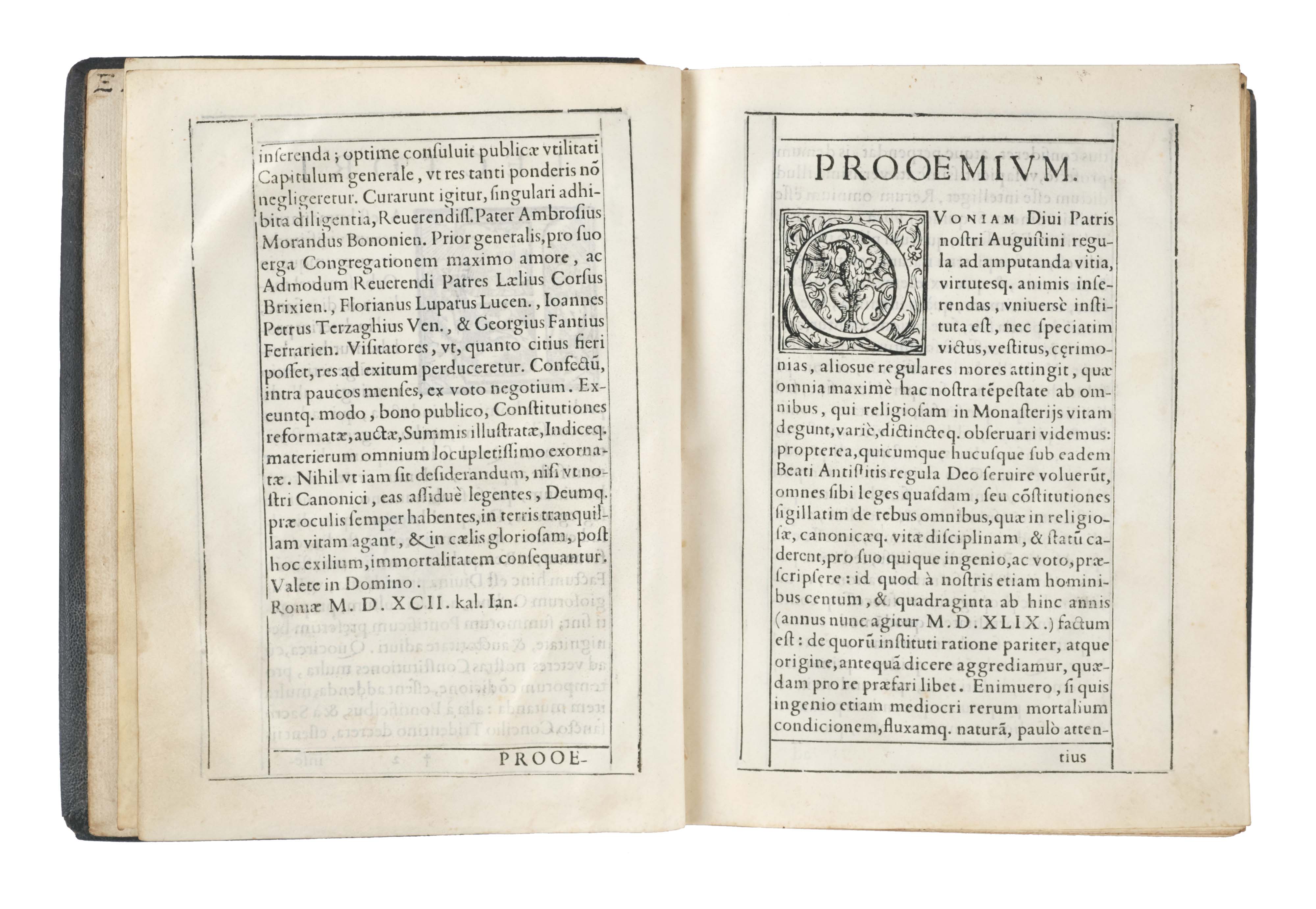 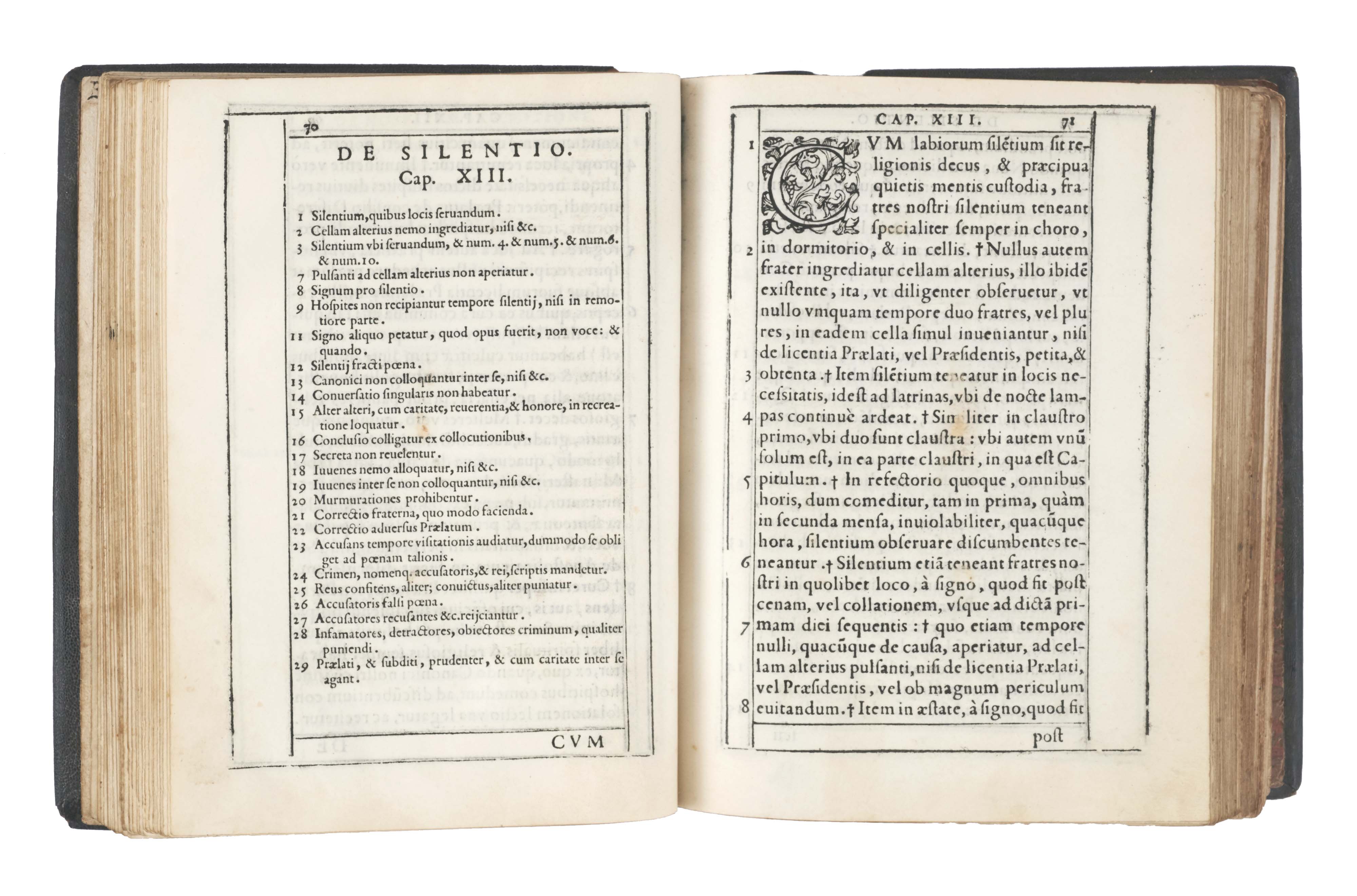 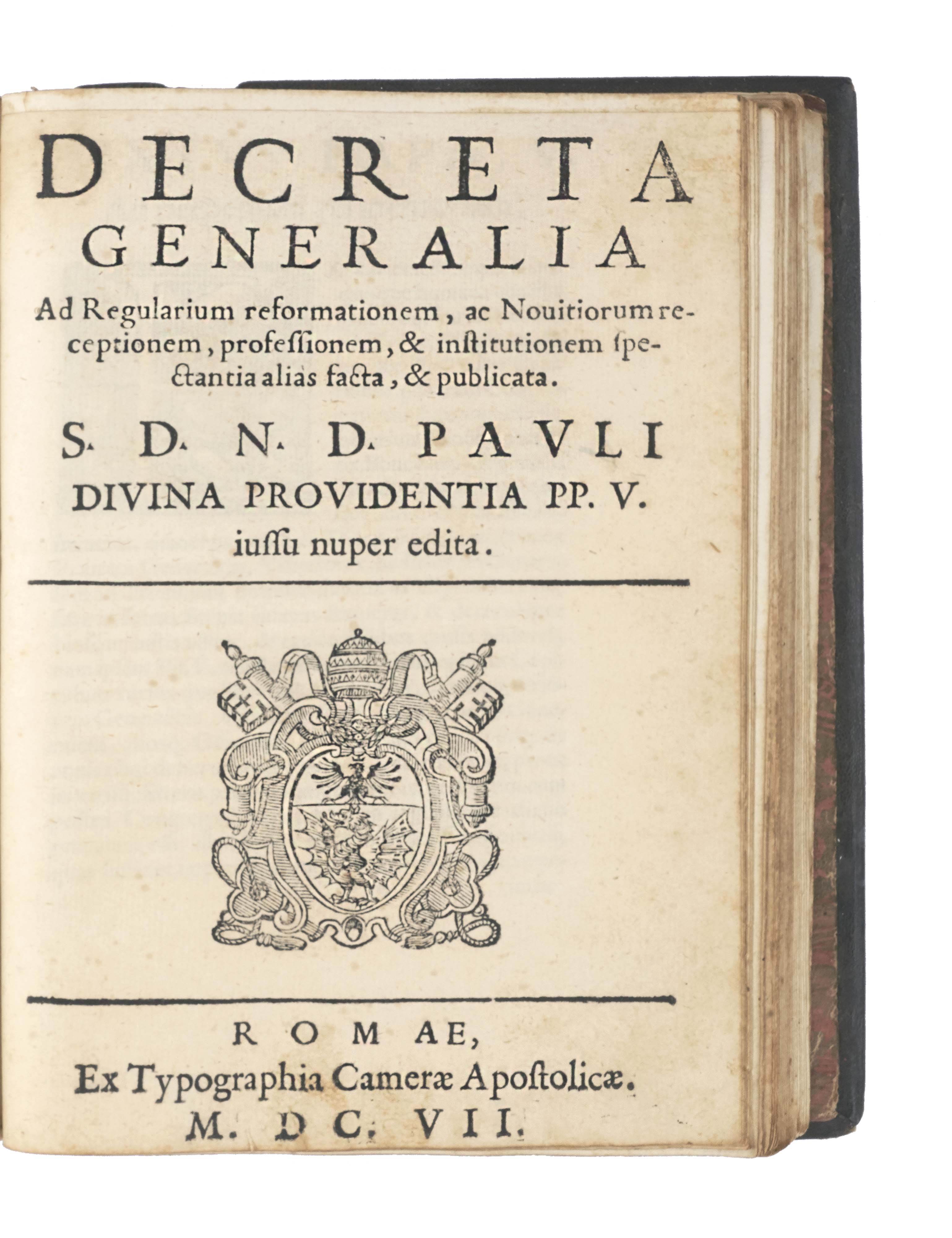 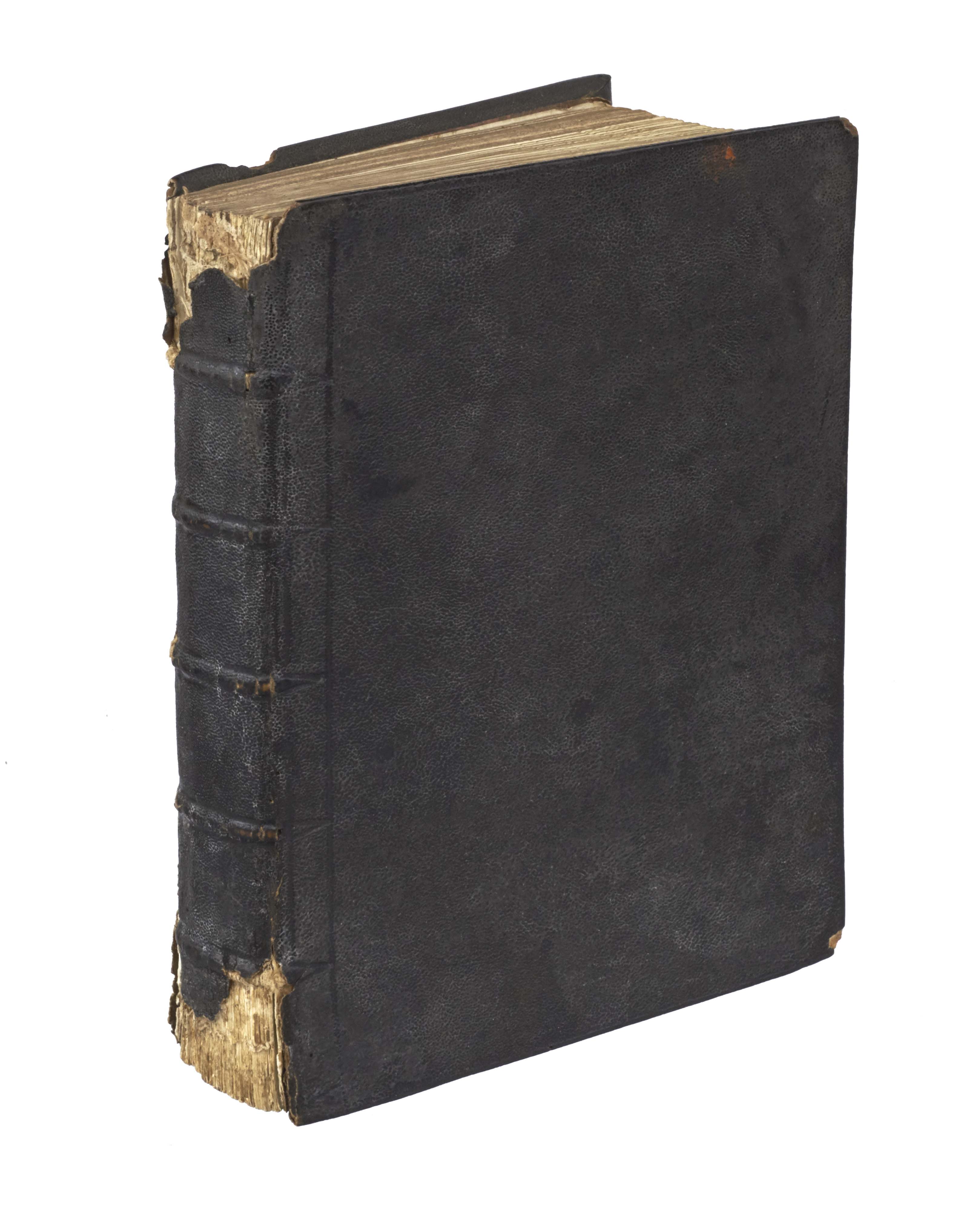 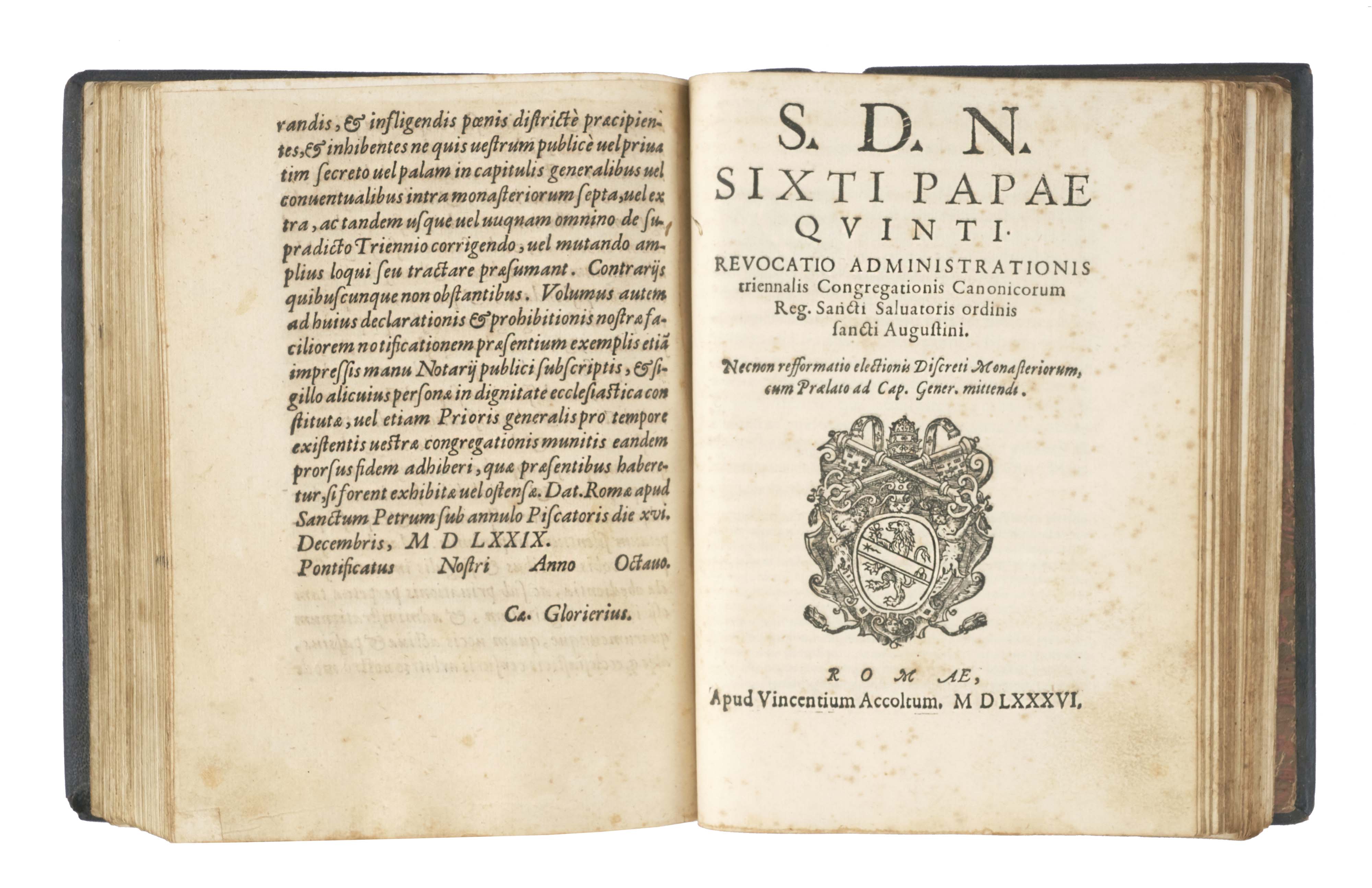 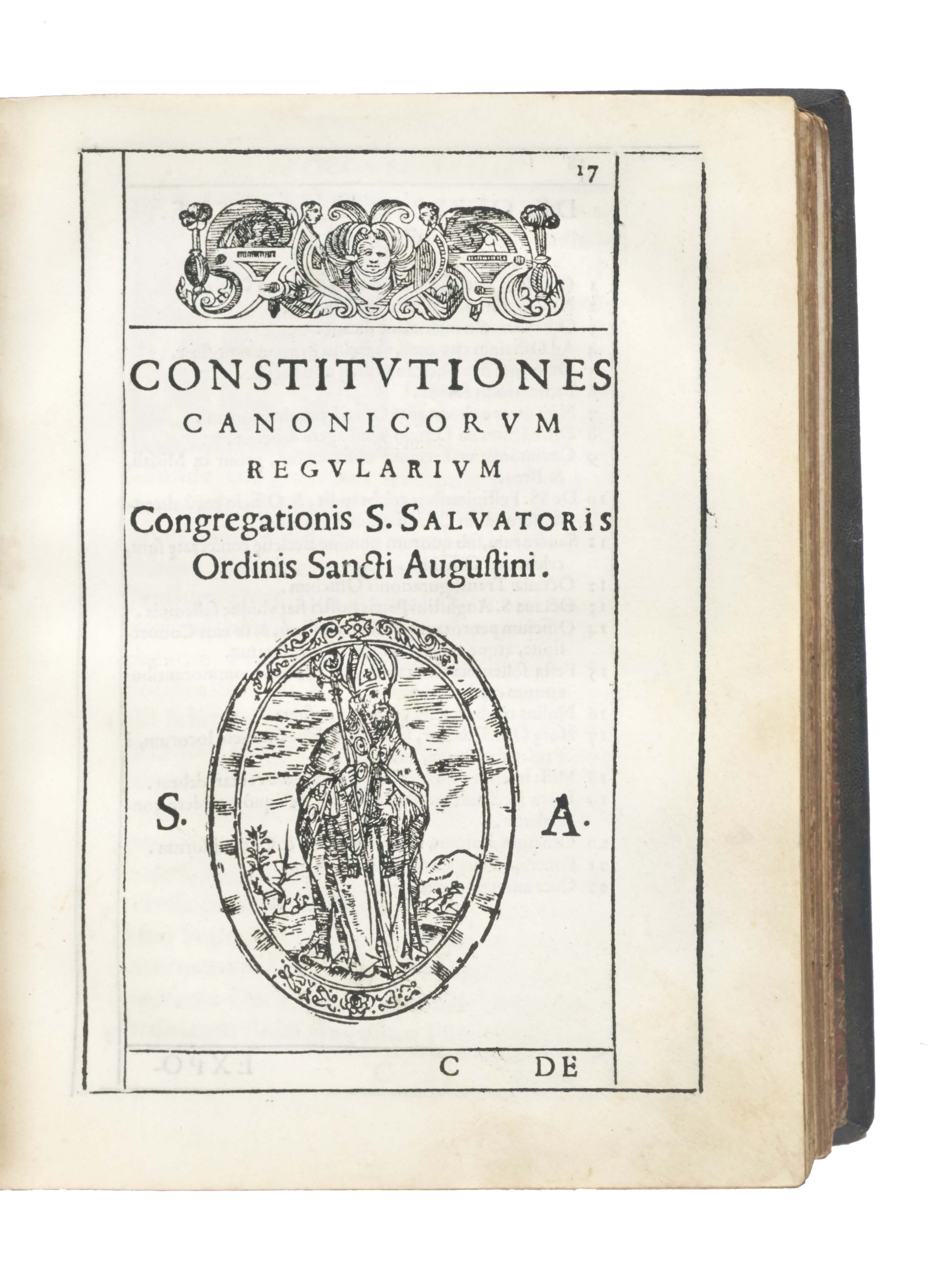 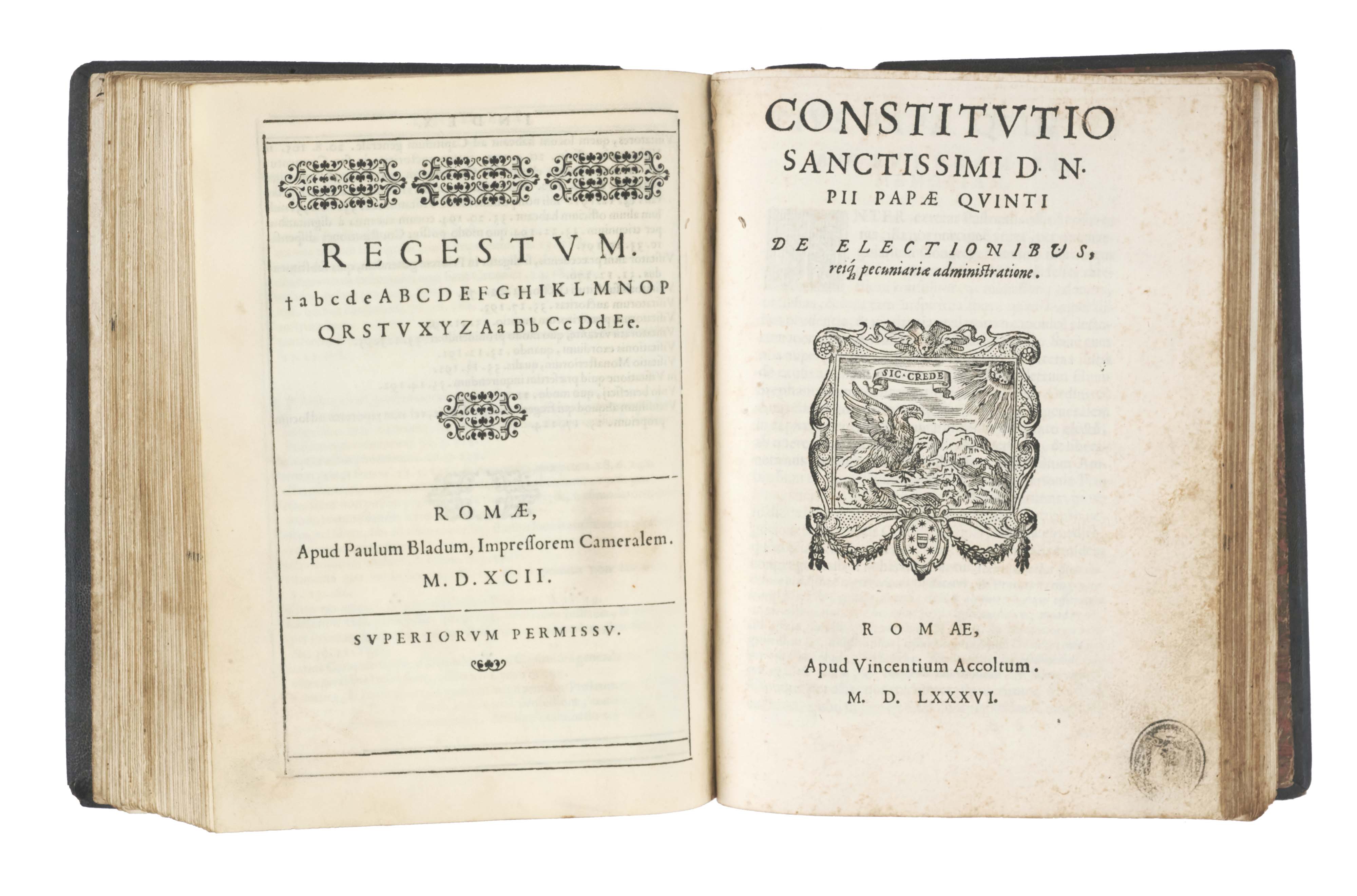 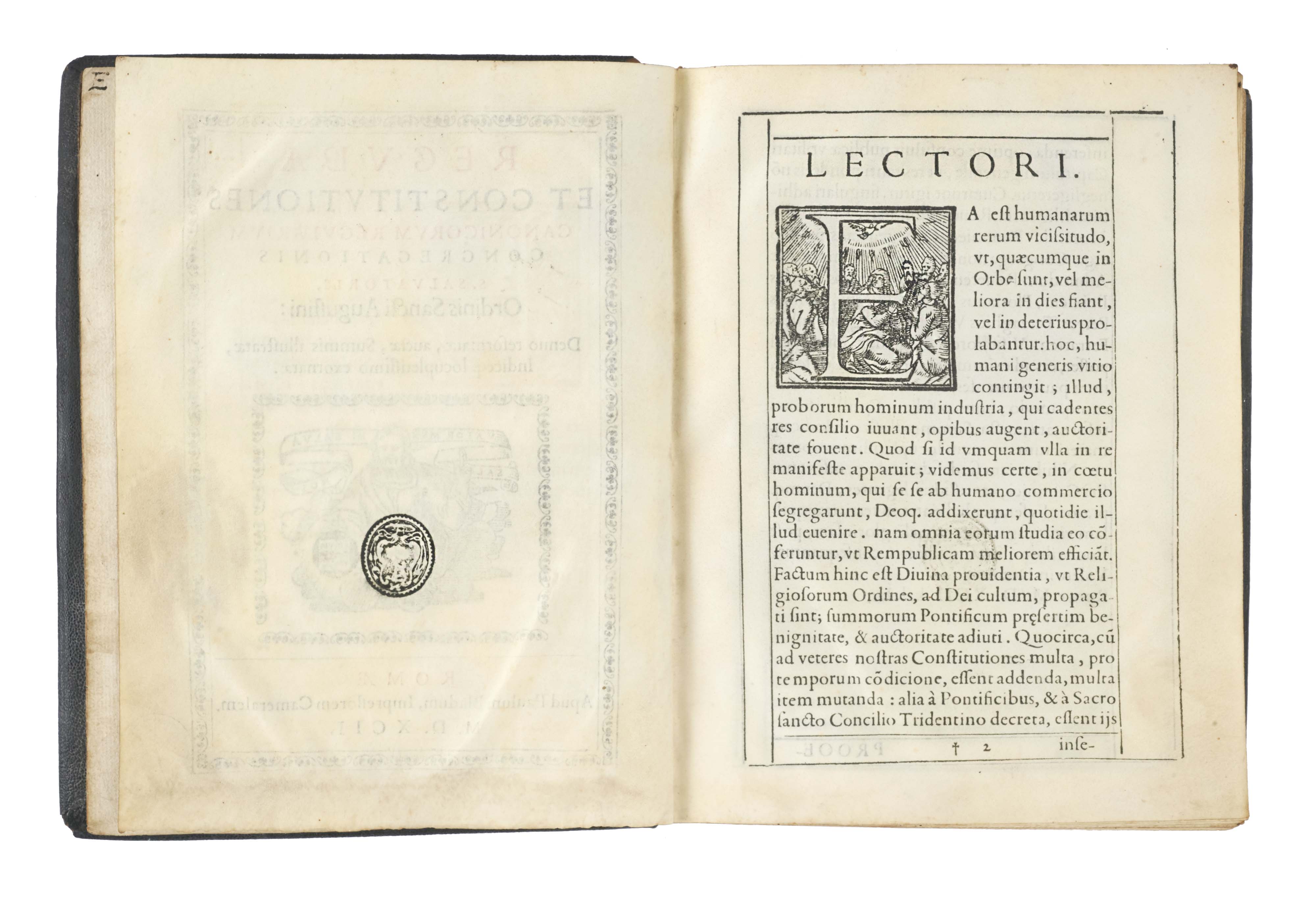 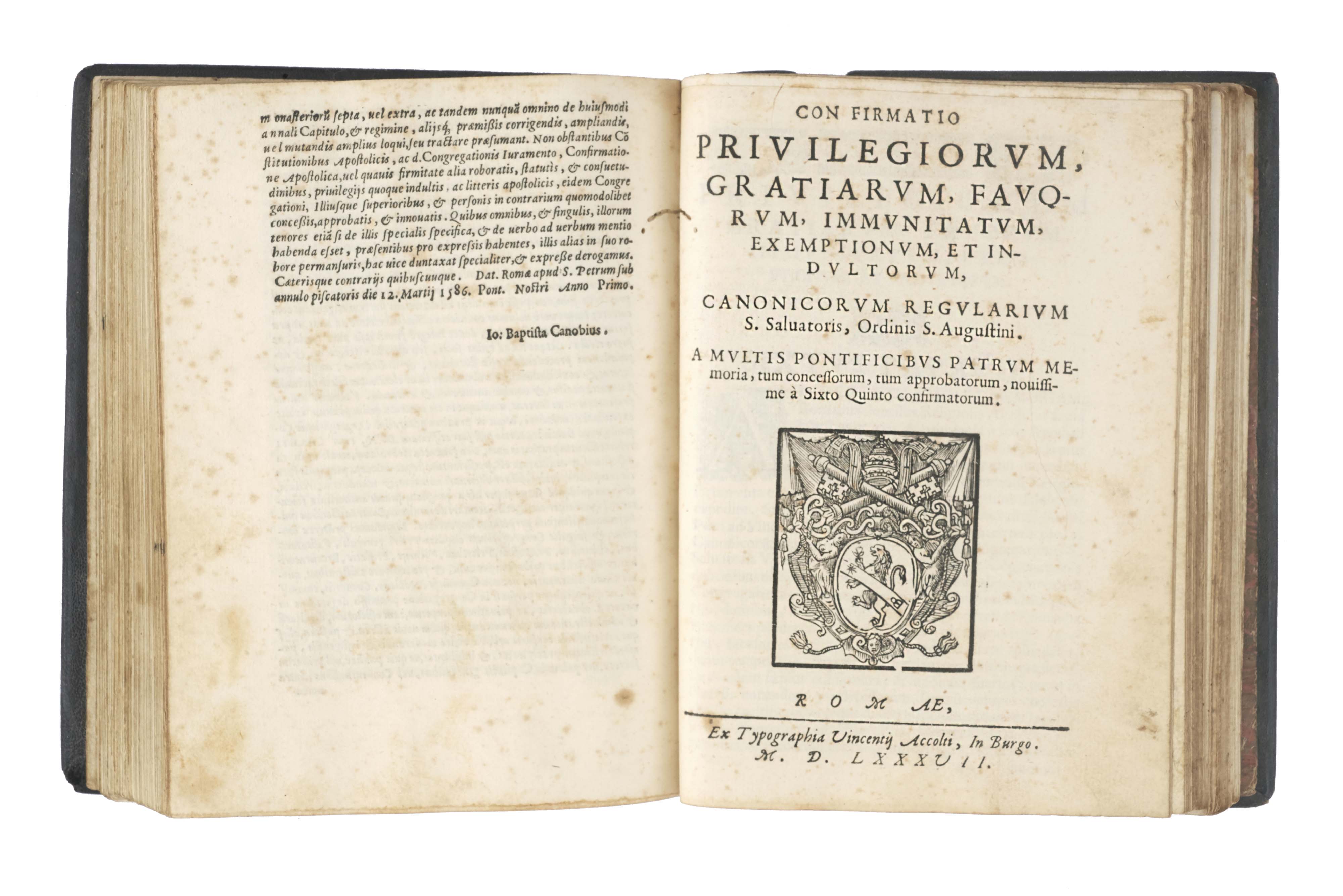 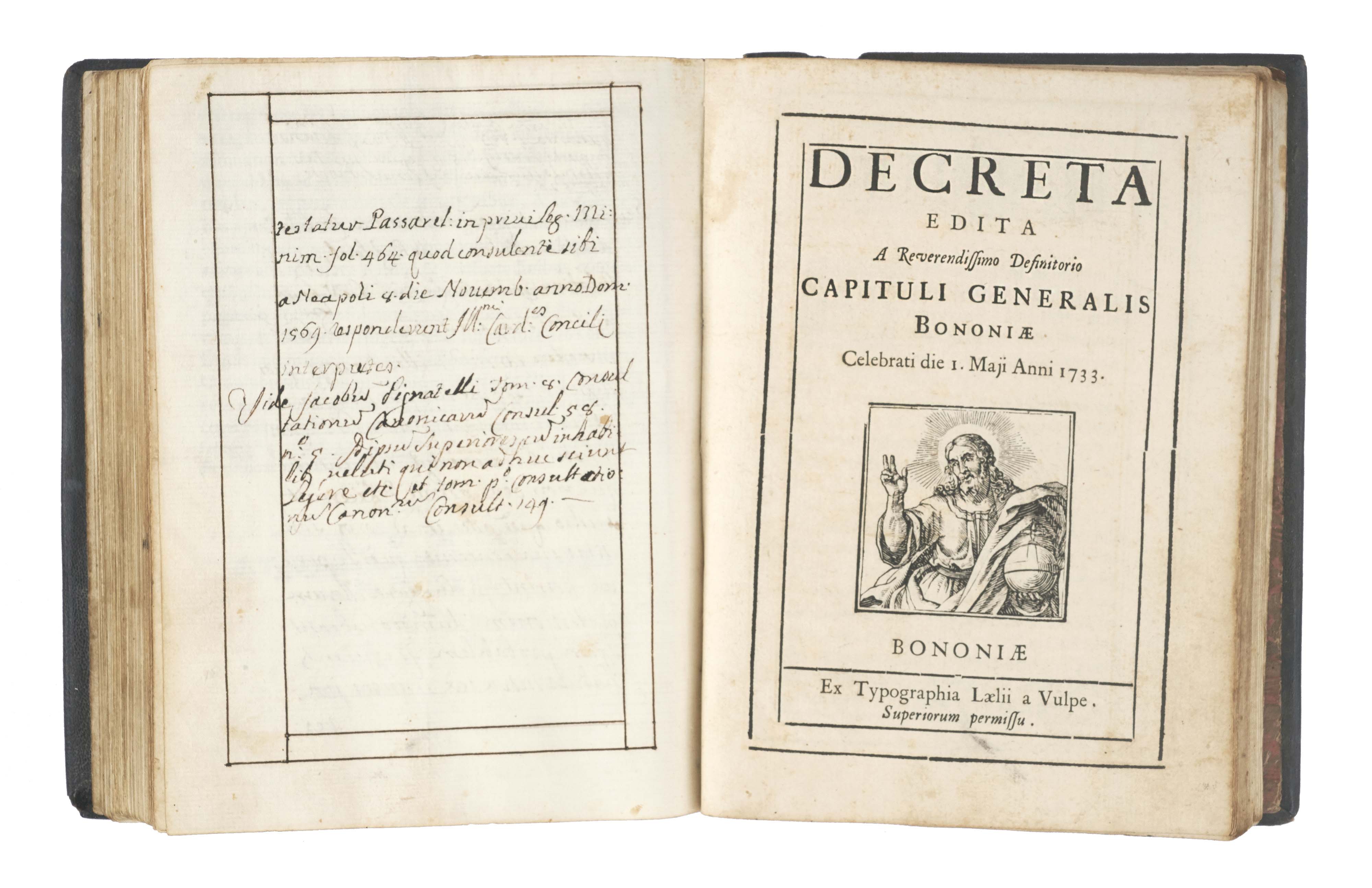 4to, pp. [48], 200, 22; without blanks B4 and Ee4; K4 replaced by cancels & and ij; printed on vellum; title and calendar printed in red and black; text within double border; woodcut vignettes depicting the Holy Saviour and Saint Augustin to title and C1 respectively; woodcut initials; bound with eight other short works, printed on paper, and 8 leaves of manuscripts, all on the same subject, short worm track in the inner margin of first few works on paper, not affecting text; overall a splendid copy, bound in ca. 1735 black shagreen (sharkskin), head and tail of spine chipped, lower joint split but holding, gilt brocade paper as pastedowns, edges gilt and gauffred; some rare underlining to first work; early eighteenth-century ink stamps of Bishop Gian Alberto De’ Grandi (see below) to lower outer corner of title of first and second works; a close variation of the aforementioned stamp, probably an earlier version, to verso of first title; eighteenth-century (?) manuscript inscription to foot of first title, mostly erased; late eighteenth-century stamp of San Pietro in Vincula (oval stamp in black ink, with an image of St Peter surrounded by the wording ‘Bibliothecae S. Petri ad vincula’ – see below) to first title, erased but still visible within printed typographic frame of title.

The Congregation of the Regular Canons of the Most Holy Saviour, called ‘Renan’ after the river Reno, near Bologna, where their first rectory was located, was officially constituted in 1418, although its origins can be traced back to the eleventh century. The Renan Congregation gradually acquired an international character (priories were established in various locations in France and England) and distinguished itself on a cultural level, maintaining its reputation as a well-regulated institution. After a period of prosperity and expansion in the sixteenth and seventeenth centuries, the Congregation saw a progressive decline in the eighteenth century, culminating in the suppression of churches and monasteries in the Napoleonic period. At the beginning of the Restoration, both the Renan Canons and their sister congregation of the Lateran Canons were left with a single monastery each, respectively S. Pietro in Vincoli in Rome and S. Maria of Piedigrotta in Naples. It was therefore decided to promote a union of the two congregations, which in 1823 joined into the Canons Regular of the Lateran.

Previously printed in a much shorter format in Bologna in 1497 (of which only 4 copies survive) and in Rome, also by Blado, in 1549 (ff. 154 only), the Regula are here bound with eight short, extremely rare, publications, spanning from 1580 to 1733, and a few eighteenth-century manuscript leaves, recording pontifical decrees, ordinances, and sanctions updating the statutes of the Order (a complete listing is available upon request).

Provenance: formerly in the private library of Gian Alberto (Francesco Gaetano) De’ Grandi (Venice, 1689 – Chioggia, 1752), Bishop of Chioggia from 1750 to 1752, and former Abbot General of the Canons Regular of St. Augustine of the Congregation of the Most Holy Saviour. After his death, the book must have found its way to the central library of the Order, held at San Pietro in Vincoli, in Rome. Following the suppression of the religious houses in 1873, as a consequence of the creation of the new Kingdom of Italy with Rome as its capital, the libraries of the suppressed religious houses were confiscated for the benefit of the newly created Biblioteca Nazionale Centrale in Rome. Of the extensive library (estimated at 15,000 volumes) of the, by then, Canons Regular of the Lateran, held at San Pietro in Vincoli, only 2000 titles were effectively transferred to the National Library in 1876, while the remaining part was dispersed (see: M. Venier, The Libraries of the suppressed Religious Houses; M. Venier, ‘Per dove, fino a dove, da chi: ricostruire il viaggio del libro attraverso i suoi segni. L’esperienza della Biblioteca nazionale centrale di Roma’, in La Bibliofilia, Vol. 117, No. 3, September-December 2015, pp. 357-366; Del Bono, Gianna. Congregazione dei canonici regolari del SS. Salvatore. Libri e Biblioteche degli Ordini Religiosi in Italia alla fine del secolo XVI. 6. Città del Vaticano, Biblioteca Apostolica Vaticana, 2018). Books with the stamp of San Pietro in Vincoli can now be found in institutions all over Continental Europe, UK and USA.

Very rare outside of Italy. OCLC records only one copy in the US (University of California, Berkley), one in the UK (University of Manchester), one in Sweden (National Library of Sweden), and two in France (Bibliothèque Sainte Geneviève and Bibliothèque Nationale de France). USTC adds one further copy, at the National Library of Russia. None of the copies recorded appear to be printed on vellum, nor to have the cancels & and ij.

Only one other copy on vellum seems to have appeared on the market in the last 200 years, apparently offered at auction in London three times in the space of 12 years, between 1829 and 1840, passing from the Hibbert to the Hanrott collection first, and then to the Butler collection (see: A Catalogue of the Library of George Hibbert, Esq., of Portland Place. Which will be sold by auction by Mr. Evans, at his house, no. 93, Pall-Mall, London, printed by W. Nicol, 1829, lot 6889; Catalogue of the Splendid, Choice, and Curious Library of P. A. Hanrott, Esq. Part the First. Sold by auctions by Mr. Evans, at his house, No. 93, Pall-Mall, 1833, lot 492; Bibliotheca Butleriana. A Catalogue of the Library of the Late Right Rev. Samuel Butler, D.D. Bishop of Lichfield. Sold by auction by Messrs. Christie and Manson, at their Great Room, 8, King Street, St. James’s Square, on Monday, June 1st, 1840, lot 370, ‘Printed upon vellum. The only copy known. A beautiful book’). The whereabouts of this copy are currently unknown.

4to, ff. [5]; bound without blank A6; woodcut vignette to title, ink stamp to lower outer corner of title.

4to, ff. [3]; bound without blank A4; woodcut vignette to title incorporating papal arms.

CNCE 8949. OCLC records only one copy, at the National Library of Scotland; Edit16 lists three copies, all in Rome.

CNCE 8952. OCLC records only one copy, at the Biblioteca Centrale Nazionale in Rome; Edit16 adds three more copies in Italy.

CNCE 8954; OCLC records only one copy, at the Biblioteca Centrale Nazionale in Rome; Edit16 adds three more copies in Italy.

OCLC records only two copies, at the Biblioteca Centrale Nazionale in Rome, and National Library of Scotland; ICCU adds 6 more copies in Italy.

4to, ff. [2]; second leaf with tears, not affecting legibility.

OCLC records only two copies, at the British Library and National Library of Scotland.

We have not been able to locate another copy of this work.