Added to your basket:
The Spanish Letter of Columbus . . . A facsimile of the original edition published by Bernard Quaritch in 1891. With an Introduction by Felipe Fernández-Armesto and essays by Martin Davies on Pere Posa and the printing of the Spanish Columbus Letter at Barcelona in 1493 and by Anthony Payne & Katherine Spears on Quaritch, the Spanish Columbus Letter, and America 1890–1892. Edited by Anthony Payne.

Over the centuries, booksellers have contributed much to the elucidation and sometimes to the falsification of historical documents. The story of the first printed account of the New World, usually known as Christopher Columbus’s Letter to Santángel or simply the Columbus Letter, illustrates both themes.

The version of it which the London bookseller Bernard Quaritch bought in 1890 and sold in 1892 was and is, by common acclaim, the most valuable item of printed Americana ever to have appeared on the market. No other copy of this, the earliest edition, a folio printed in Spanish at Barcelona in 1493, is known. Samuel Eliot Morison, the enormously influential scholar who long occupied the chair of American history at Harvard, called it ‘the single most important document on the discovery of America’. Quaritch and his able assistant, Michael Kerney, were responsible for an enduring contribution to scholarship, producing in the Spanish Letter of Columbus – republished here in an edition limited to 500 copies – the first authoritative study of the document. But, as Felipe Fernández-Armesto recounts in his Introduction, it nearly got dismissed as a forgery.

Quaritch’s Spanish Letter of Columbus, appearing in the thick of contention and in the midst of forgeries, was therefore more than just the usual bookseller’s publicity material. It was an important piece of scholarly claim-staking on behalf of a genuine text against unwarranted assertions. Despite some errors – most of which were the result of assumptions common at the time or deficiencies of knowledge unremedied until later – Quaritch’s Spanish Letter of Columbus did its job effectively. It demonstrated, correctly, that the folio in question was printed at Barcelona in 1493 and that all other known editions of the Columbus Letter followed it. This was a service to his firm and to the Lenox Library (now part of the New York Public Library), which purchased the item – and to the whole world of learning, which has been able, ever since, to return with confidence to a precious and intriguing text: the first piece of printing to reveal to the Old World the existence of the New.

Besides Felipe Fernández-Armesto’s extensive Introduction, this new edition of Bernard Quaritch’s Spanish Letter of Columbus includes an account of the printing of the original Spanish Columbus Letter in 1493 and, drawing on materials surviving in the Quaritch Archive, the story of how Quaritch, and his son, Alfred, marketed it in America.

contributor’s copy, with a letter from the editor [LEWIS, Wyndham.]

A triple issue of Agenda devoted to Lewis. Bridson’s article, ‘The making of The Human Age’ appears on pp. 163-171, and mentions his own inscribed copy of the work; also included are the talk commissioned from I. A. Richards before the broadcast of The Childermass, two articles by Pound, several excerpts from Lewis, and a bibliography. 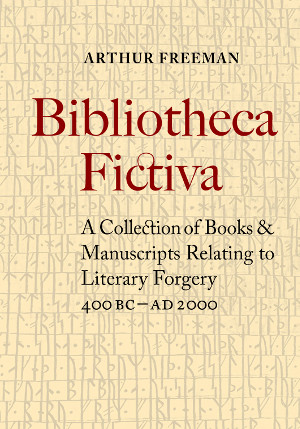