Folio, ff. [196]; [a]2-12, [b]12, [c]10, [d-y]8, [z]11, without the first and final blanks [a]1 and [z]12, and without the appendix [A]8 ([A]8 blank); 41 lines to a page, roman letter (with some Greek type, incipit [b]2r) decorated with six-line initial M in gold with white vine decoration on a coloured ground of blue, red, and green, other initials and paragraph marks supplied in red and blue alternately, quire signatures added in manuscript in an early hand (mostly trimmed); repaired tear to lower margin of [a]10, some slight stains (mostly marginal), light dampstain to upper margin of final 20 ff., a very good, wide-margined copy; bound in eighteenth-century tree sheep, rebacked with the original spine relaid, borders roll-tooled in gilt, spine gilt in compartments with gilt lettering-pieces, marbled endpapers; a few light surface abrasions, neat repairs at extremities; contemporary inscription ‘Ex dono fratris thome donati Veneti’ to [b]1v, numerous early marginalia in a fine humanistic hand; reportedly from the Crevenna Library (nineteenth-century inscription to the front endpaper); from the library of the English art collector William Fuller Maitland (1813–1876), with his armorial bookplate on the front pastedown.

Added to your basket:
Opera.

A fine product of the first Venetian press, established in 1469 by Johannes de Spira and continued by his brother Vindelinus from 1470 until 1473. This was the fifth impression of the works of Lactantius, the hugely successful North-African early Christian writer.

Lactantius’s writings, composed mainly during years of poverty and persecution following Diocletian’s ban on Christianity, were held up in the Renaissance as exemplary, both as apologetic works and as stylistic models, and acclaimed as exceptionally elegant and persuasive, earning the author the title ‘Cicero Christianus’. Though dismissed as heretical in the turbulent early centuries when Christianity was wrestling towards some univocal orthodoxy, these works were singled out by humanists (they are among the very first works to have been printed upon the invention of the printing press) in their search for a quality of reasonableness in Christianity, which embraced aspects of pagan antiquity. The poem ‘The Phoenix’, included in this edition, can be described as Christian only in the most cryptic and indirect way, the story of the death and rebirth of that mythical bird echoing Eastern mythologies; it appears to have been the main source for the Old English poem ‘The Phoenix’ in the Exeter book. 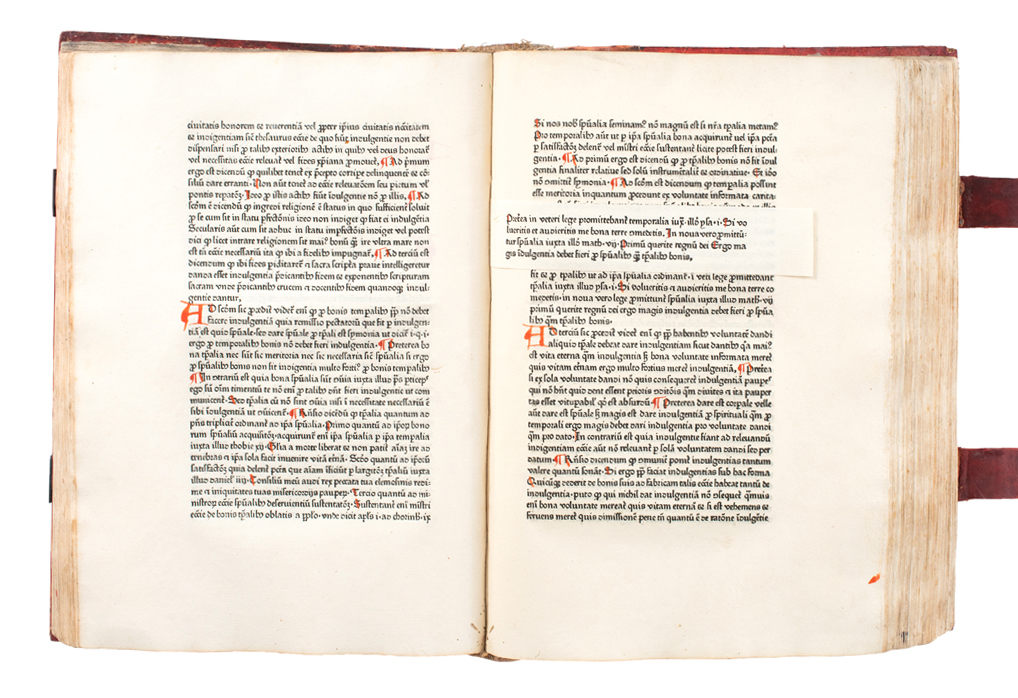 ONE OF THE MOST IMPORTANT BOOKS
EVER WRITTEN ON PAPAL SUPREMACY AUGUSTINUS TRIUMPHUS [i.e. AUGUSTINUS de Ancona].

First edition of this highly important and influential magnum opus of political theory, a defence of papal supremacy.