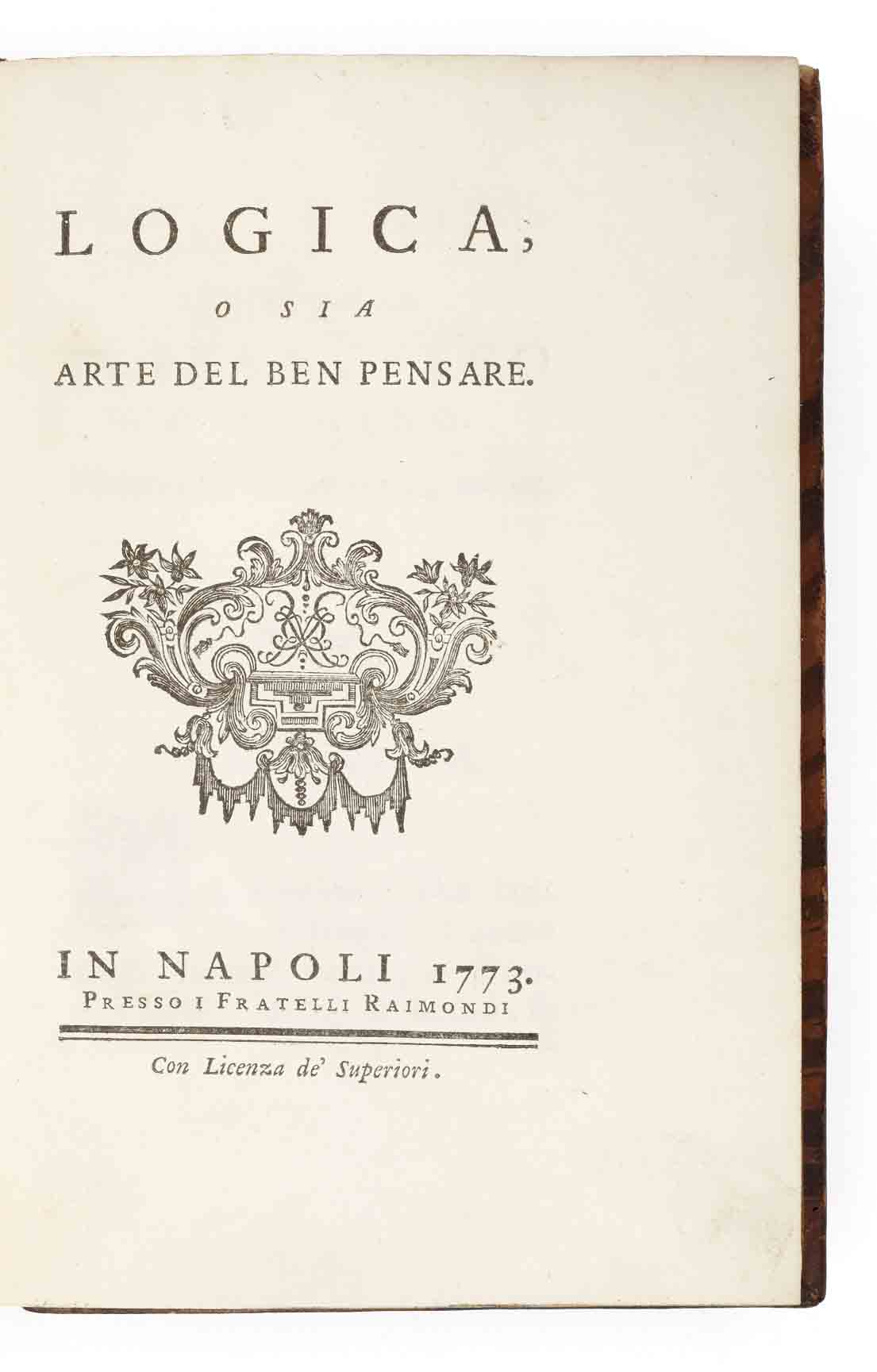 First edition, very rare (one other copy only traced, in Italy), of this early work on logic by the important Italian enlightenment philosopher Francesco Longano (1728-1796).

Divided into four discorsi, Longano’s treatise is one of reasoning rather than of formal logic. He discusses the senses, memory and temperament, the division of mental acts, the origins and development of language, types of speech, the nature of propositions, and the development of syllogisms, before investigating the causes of error, and the types of mistake that can be made in sensing, in speech, in the forming of propositions, and in the construction of arguments. The final discorso is concerned with truth: its origins and definition, the nature of evidence, demonstrations of certainty (whether epistemological or moral), and ways of determining probability. Longano concludes with rules for philosophising well, and for expressing the truth. Throughout, he draws heavily on Bacon, d’Alembert, Condillac, and others.

Longano (1728-1796) was a key player not only in the theoretical development of the Italian Enlightenment. His thoughts on freedom and equality, although only rarely organised in a systematic philosophy, sprang from thorough observation of features of Southern Italian society and, once crystallized in theory, turned back to inform action and programs of reform. A pupil of the economist and reformer Genovesi, and an admirer of Locke, Longano’s early interest in philosophy evolved into active criticism of social structures founded on inequality and exploitation, then re-emerged in its more theoretical form in his late work of the 1790s. Longano’s perceptive synthesis of the Western logical tradition spans from Aristotle to Bacon, Descartes, Locke, Wolf, Condillac, and Hume.

Only one copy of this work has been located in a public library (University of Sassari, Italy) and there are no auction records of it in the last thirty years.

First edition, rare. Saint-Simon’s is the Socialism of equal opportunity rather than of equal wealth; the nation must be industrious, but there will always be classes of industrious and the idle, for which reason there will always be hierarchies. Saint-Simon had no great faith in political democracy, despite his agitation against social injustice (including towards women); efficient administration of society by the industriels would ensure the governing of things and not people. This was the first collective appearance in book form of a series of pamphlets in the form of letters, published individually in 1821 during the trial of their author for sedition, of which he was acquitted. This volume contains the première and deuxième correspondences, the first containing four letters to industrialists, bankers, manufacturers, etc., the second containing six; both with additional letters and addresses to the king and to philanthropists. A second volume of letters, also collected from separately printed pamphlets, would appear the following year.