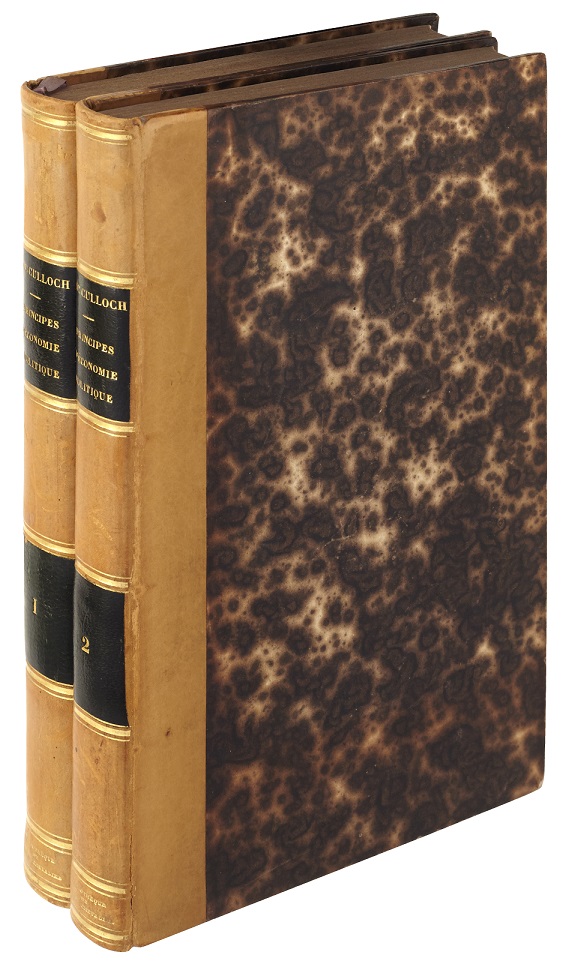 First and only complete French translation, an association copy signed by the translator for the historian and member of the Académie française Pierre-François Tissot, and afterwards in the library of the economist and statist Michel Chevalier, who like Tissot held a chair at the Collège de France.

McCulloch’s Principles, published first in 1825 but by 1830 greatly expanded, quickly established itself as one of the most referenced manuals of political economy. His was the first synthetic modern definition of political economy (Coquelin & Guillaumin, II, 114). ‘For McCulloch was reserved the honour of presenting in a popular form the ideas of Ricardo, modifying them in the superior manner possible to his eminently positive and practical mind’ (Blanqui History of Political Economy in Europe, p. 461). Michel Chevalier, who came to possess this copy from the hands of his fellow academic the historian Tissot, would have had a particular interest in this work as the most popular exposition of Ricardo’s thought. He criticized what he perceived as Ricardo’s ‘abstraction of political economy from ethics’; Karl Marx famously and pointedly countered Chevalier’s criticism re-stating the conceptual independence of the two areas.

The translator, Augustin Planche, who published this French version based on the fourth edition, went on to translate Henry Charles Carey’s Principles of social science in 1861.

A Sammelband of works concerning the suppression of the celebrated Benedictine abbey of Port-Royal des Champs near Versailles.