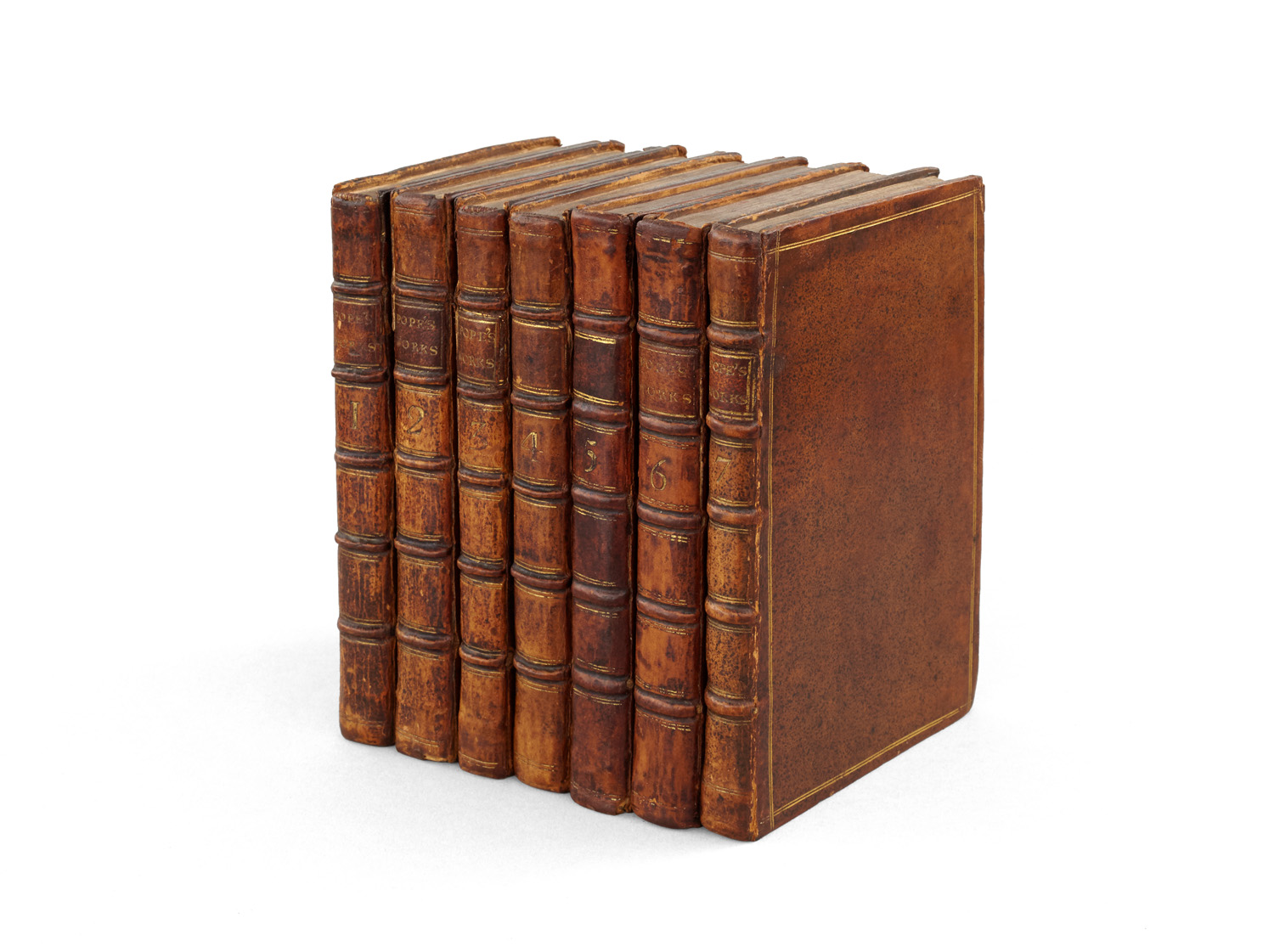 Seven volumes (the volume labelled ‘VII’ being ‘Vol II. Part II’), small 8vo.; with a portrait frontispiece in volume I, half-titles in vols. II, III, V and II Part II, and an errata leaf at the end of II Part II, but without the leaf ‘To the Binder’ in vol. II; pp. 1-46 of vol. VI are bound at the end of vol. V (to make the volumes of similar dimension); a fine set in contemporary speckled calf, spines numbered direct, morocco labels (two wanting); contemporary armorial bookplate of Robert Gordon Esq. of Hallhead.

Added to your basket:
The Works … Vol. I[-VI]. With explanatory Notes and Additions never before printed.

These sets were by no means cheap reprints of the folio and octavo formats, as Pope actually preferred the ‘neat little octavos’, for both aesthetic and financial reasons, and they went through four to six editions each. ‘Apart from restoring the traditional use of italic in them, Pope used successive editions to make significant revisions in the accidentals as well as the substantives of his text; and we know that he read proof for the volumes published for Lintot as well as those of his own printer and publishers’ (Foxon, Pope and the Early Eighteenth Century Book Trade).

It is publication of some bibliographical complexity. ‘The publishers appear to have planned at first to make this small octavo edition of Pope’s Works a four volume set. Gilliver set the form by printing his small octavo Works, vol. II, and the Dunciad (vol IV) as two “pocket volumes.” Then Lintot came into the undertaking, and re-printed what he had the copyright in – the Works [I] of 1717 – and some additional poems, as two more “pocket volumes.” ’ (Griffith). Volumes V and VI, printed for Roberts but ‘really prepared by Cooper (or possibly by Dodsley)’ and comprising the Letters, followed in 1737, and were evidently prepared with Pope’s participation. Rounding off the set, Vol. II. Part II is also important, ‘because it is the princeps of several short poems; of some others it embodies revisions, notably of Sober Advice’ (ibid.). Six minor poems appeared here for the first time.

Here, Vols. I-II are present in the second of two very similar editions (Griffith’s ‘b’ variants), printed in the same year but from different settings of type. Vols III-VI are first editions. Vol II. Part II is a second edition unknown to Griffith, who described a more complicated volume with cancels. Here pagination and signatures are continuous and there is an errata leaf. Of this latter volume ESTC shows only six copies in 4 locations (confusing matters by giving, erroneously, ‘Dublin’ as the place of publication).

A very good copy indeed of a coherent and complete set in attractive contemporary condition, and scarce thus.

PRINTED FOR THE CHANNEL ISLANDS AND THE SAVOY [BOOK OF COMMON PRAYER.]

The Norfolk poetical Miscellany. To which are added some select Essays and Letters in Prose. Never printed before. By the Author of the Progress of Physick. In two Volumes …

First edition. This lively miscellany, containing a large number of amusing short poems (but nothing for the libertine), was assembled by William Cowper’s uncle, the father of Theodora, later Lady Hesketh, with whom the poet fell in love. The dedication to the young Lady Caroline [Cowper] is subscribed ‘Timothy Scribble’: ‘Too true it is, that the present Age has been fruitful of Miscellanies; and I wish it was less true, that even the best Collections of them (tho’ handed to us by the brightest Wits of our Family [i.e. Scribblers and Scriblerians]) are not without some Impurities, which make them very unfit Companions for Youth ….’ ‘But to say a Word of the following Collection. It consists chiefly of Original Pieces – many of them (and those I fear the worst) are the Editor’s own – some never so much as handed about in Manuscript – few ever committed to the Press before ….’