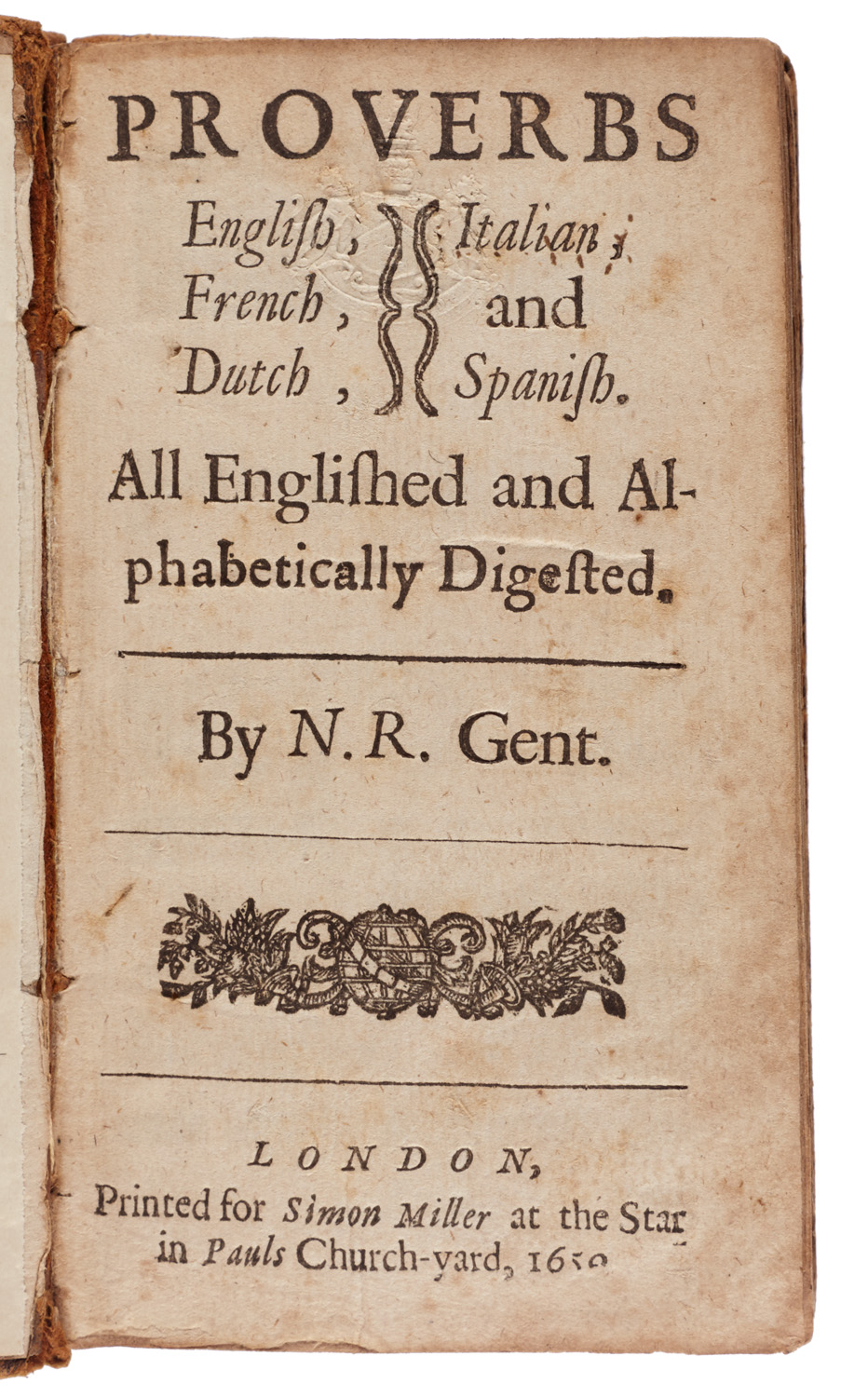 12mo., pp. [8], 151, [1], [6, advertisements], wanting the terminal leaf (a longitudinal half-title) as often; printed flaw affecting ‘9’ in the date of the imprint on the title-page, last leaf of advertisements adhered to endpaper, else a very good copy in contemporary sheep, rubbed; the Macclesfield copy, with blind-stamp and bookplate.

Added to your basket:
Proverbs English, French, Dutch, Italian and Spanish. All Englished and alphabetically digested …

First and only edition of a scarce collection of idiomatic phrases and proverbs, many translated from other languages, with a selection of 114 ‘Golden sentences’ at the end.

The sources are wide-ranging – we note, for example, ‘A dwarf on a giant’s shoulders sees farther of the two’, an older sentiment but here quoting directly from George Herbert’s Jacula Prudentum, and ‘A rouling stone gathers no Mosse’ (presumably taken from Heywood’s Proverbes). Age-old saws include ‘A chip of the old block’, ‘I will not buy a pig in a poke’, ‘One swallow makes not a summer’, and ‘Ynough is as good as a Feast’. The golden sentences are more substantial, with attributions to Bacon, Plato, Henry Wotton.

The History of the Conquest of Mexico, by the celebrated Hernan Cortes. Containing a faithful and entertaining Detail of all his amazing Victories, in that vast Empire, its Laws, Customs, Religion, &c. A Work abounding with Strokes of Generalship, and the most refined Maxims of civil Policy. To which is added, the Voyage of Vasco de Gama, extracted from Osorio, Bishop of Sylves. Published for the Improvement and Entertainment of the British Youth of both Sexes …

The Memoires of Monsieur Du Vall: containing the history of his Life and Death. Whereunto are annexed his last Speech and Epitaph …

First(?) edition of partly fictitious and often satirical life of the highwayman Claude Duval, published shortly after his execution in 1670. This is the more substantial of two opportunistic biographies, between them the main sources of information about him, though by no means entirely trustworthy.