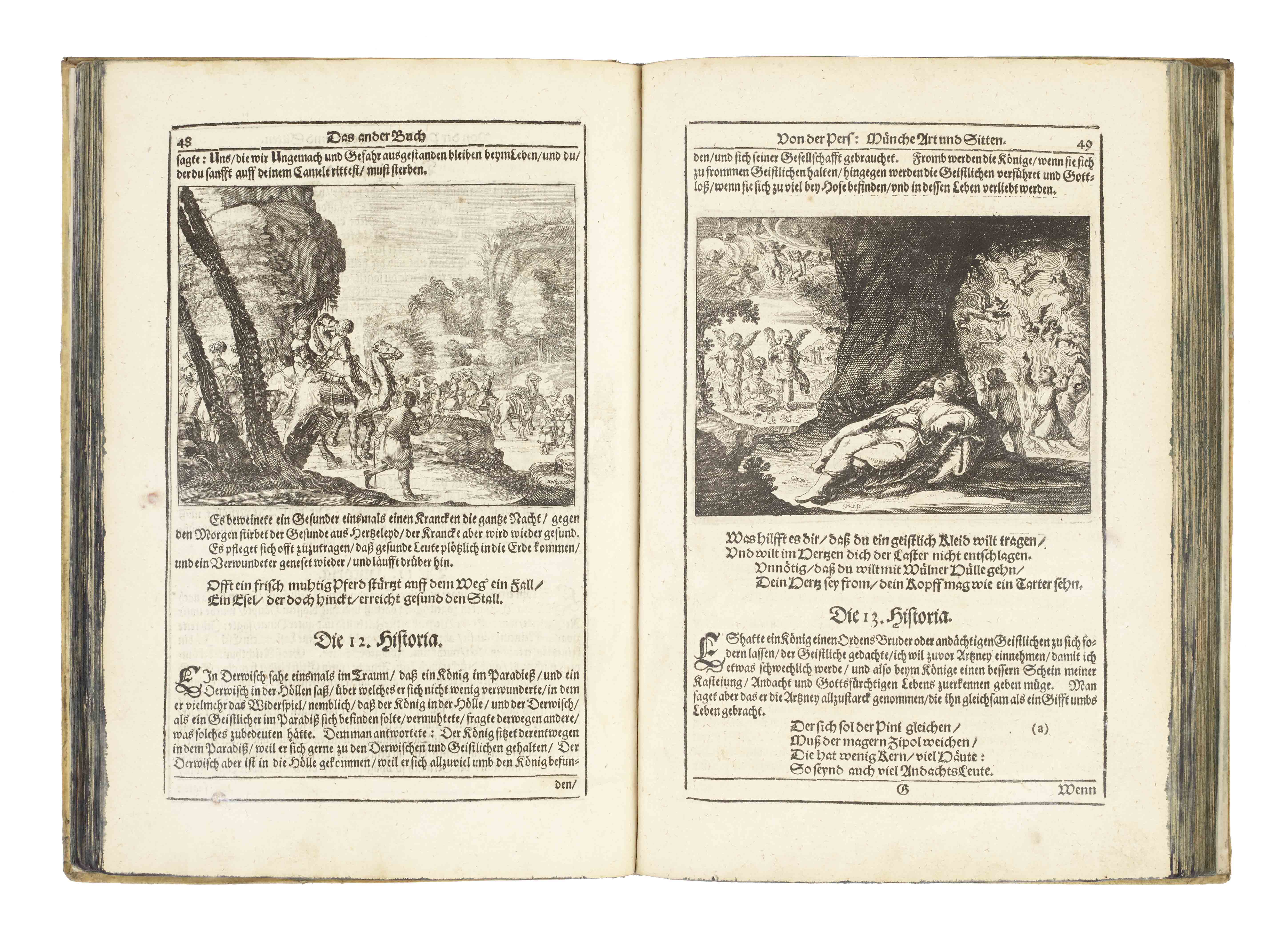 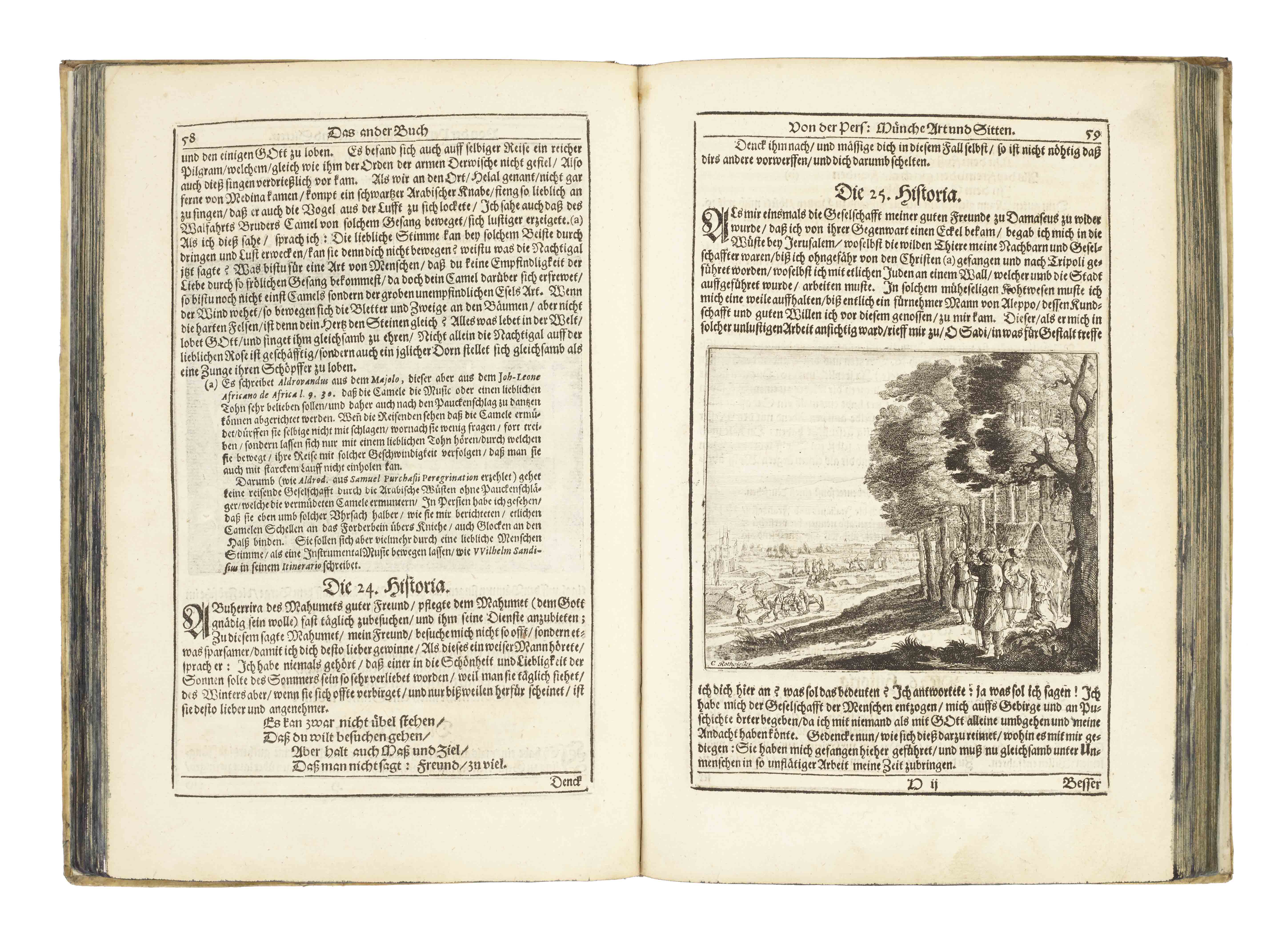 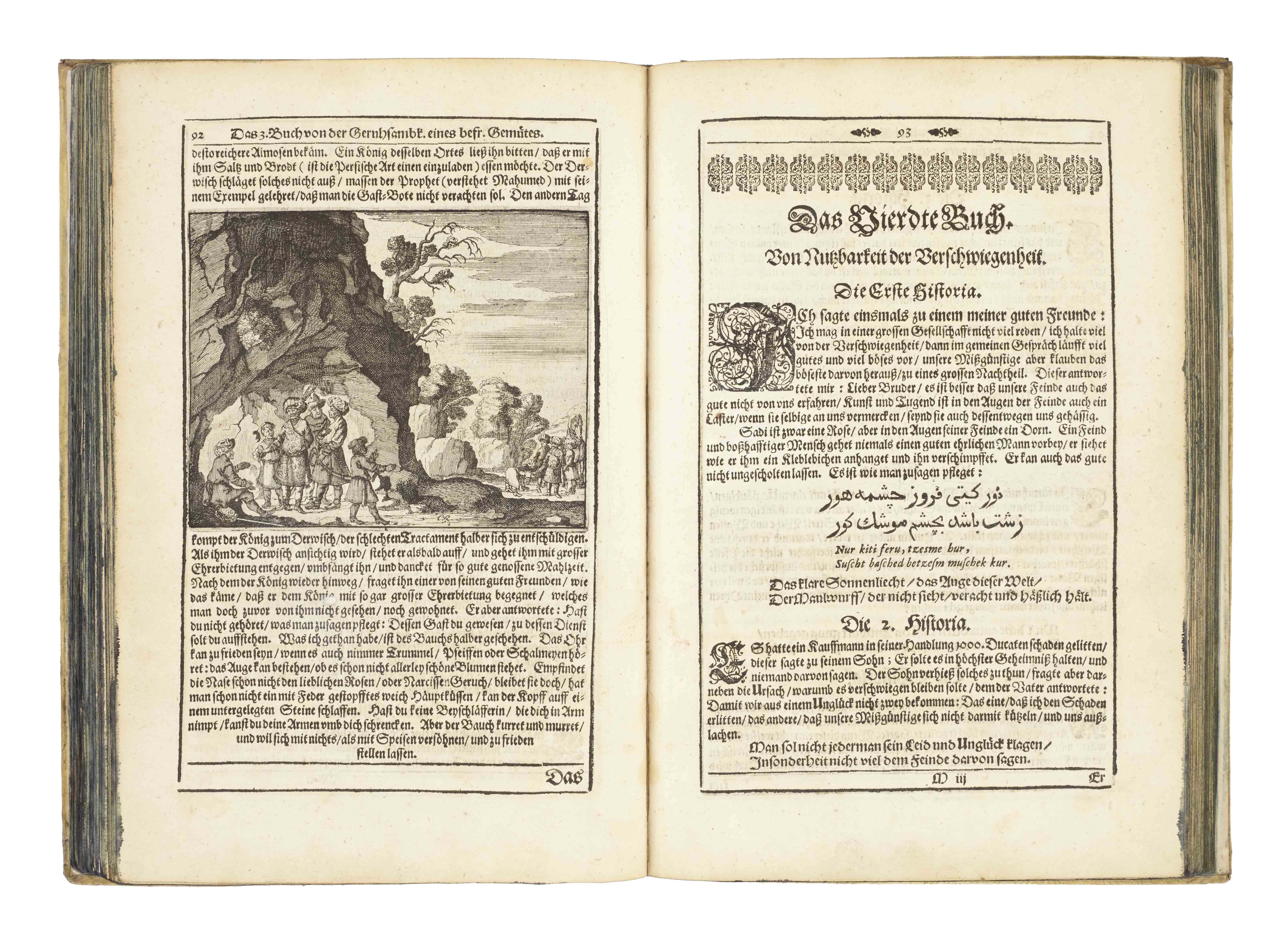 Small folio, pp. [52], 196, [30], with an engraved additional title and an engraved portrait of Duke Christian Ludwig von Braunschweig; text in German with occasional words or phrases in Persian, with 35 engraved illustrations in the text; woodcut head- and tailpieces and initials; engraved additional title trimmed to edge of image and mounted, inner margin of title, lower margins of two leaves (G2-3) and fore-margin of one leaf (B2) strengthened, a few other repaired marginal tears and small burn-holes (text not affected), some minor staining and light browning, but a good copy in contemporary vellum over boards, spine lettered in ink, blue edges; recased, endpapers renewed.

The Gulistān is a collection of maxims and reflections influenced by the legendary Indian Bidpai. It was introduced to Europe by André Du Ryer who published his translation in 1634. Du Ryer’s translation was used as the basis for a German translation printed in 1636, and in 1651 Georgius Gentius published a Latin version in Amsterdam. The itinerant scholar Adam Olearius (1599–1671) prepared the present translation with the help of Haqq-virdi, a Persian (or possibly an Armenian) he had brought from Safavid Iran. ‘Everything is reproduced in good concise German, and Olearius fully earned his admission in 1651 to the Fruchtbringende Gesellschaft under the sobriquet “der Vielbemühte” ’ (Faber du Faur). Whereas the other, earlier editions only had engraved title-pages, Olearius’s is the first illustrated edition.

‘The epithet “Machiavellian” which has sometimes been applied to Sa‘di as a reproach is in many ways a valid characterisation, in that both Machiavelli and Sa‘di, writing in turbulent and potentially disastrous political circumstances, strove to provide advice that would ensure their audience’s successful negotiation of an exceptionally risky and faction-ridden world. The crucial difference is that, whereas Machiavelli writes directly to and for a central actor in such political upheavals, Sa‘di’s intended audience . . . would seem to be much more those on the sidelines of major events, hoping to survive by luck and their wits. Further, in Sa‘di’s case, to this “Machiavellian” preoccupation with survival must be added a strong sympathy for the vulnerable and weak . . . and a constantly reiterated plea for tolerance . . . . Perhaps in part because of their self-consciously “international” and unprovincial interests Sa‘di’s writings were highly influential . . . . His popularity in the Ottoman empire and Mughal India led to his name being known in the West at a relatively early period. French, German and Latin translations of parts of his oeuvre appeared in the mid-17th century, and Gentius brought out an edition of the Gulistān in 1651. The benevolence of Sa‘di’s usual sentiments and his frequent advocacy of irenic tolerance made him particularly attractive to Enlightenment authors, and Voltaire pretended, tongue in cheek, that his Zadig was a translation from Sa‘di’ (Encyclopaedia of Islam).

The engraved additional title and many of the finer engravings are signed by Christian Rothgiesser (d. 1659). One engraving (p. 49) is signed ‘F. Mul.’. The remaining, unsigned, engravings include a number which are evidently by another, rather less accomplished, hand. 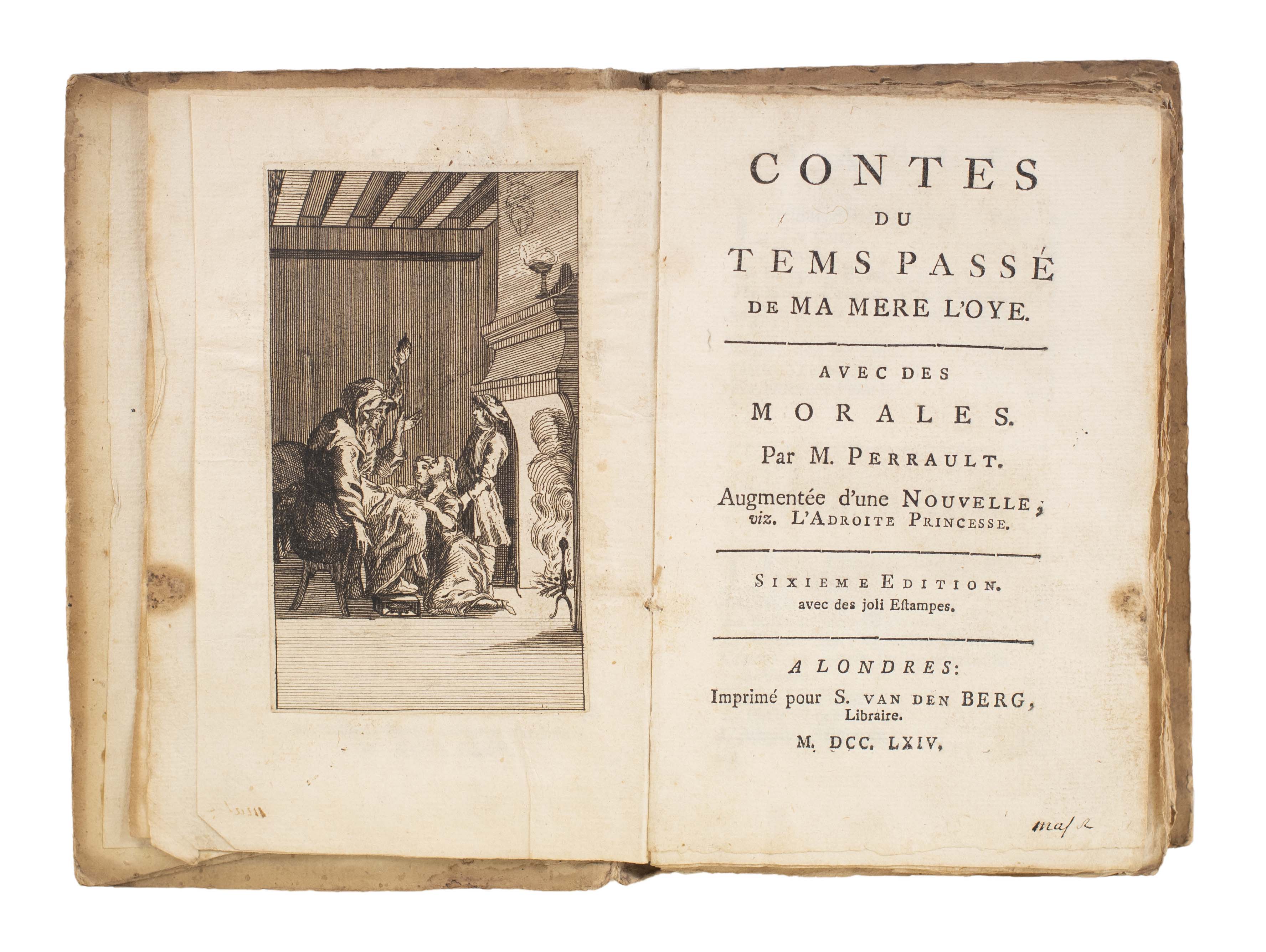 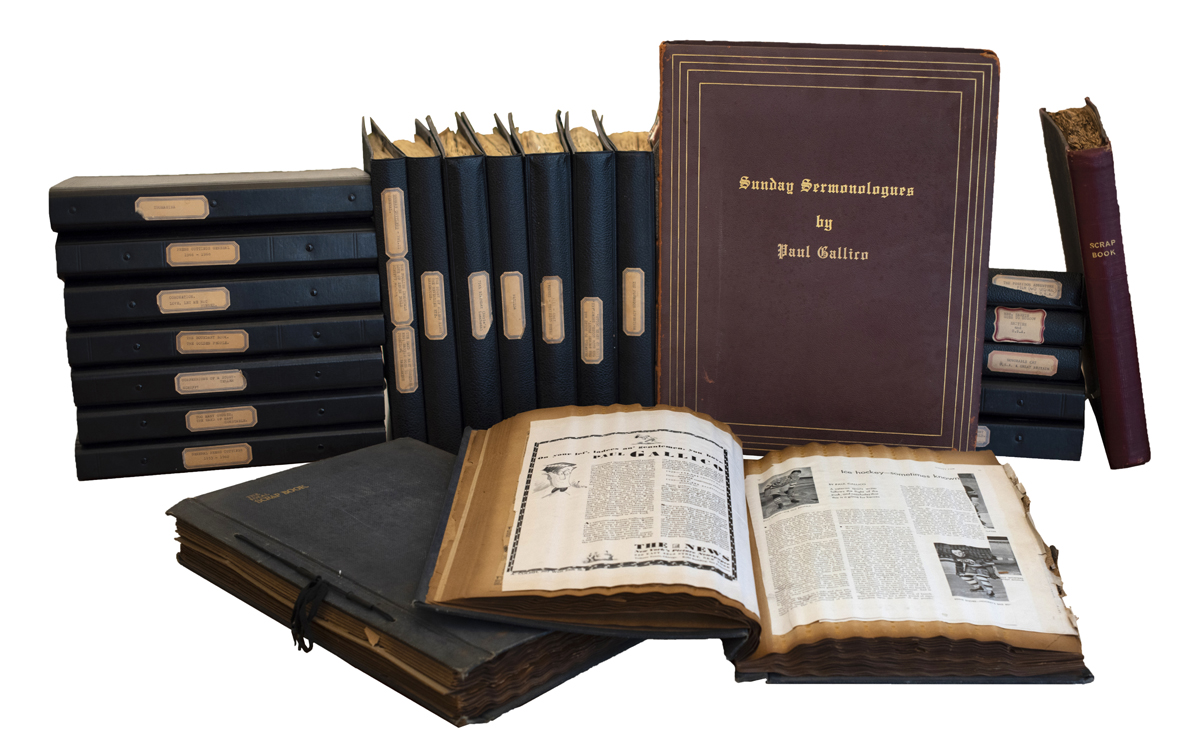 An archive of thirty-four scrapbooks compiled by Gallico.

A lovingly and meticulously compiled archive of the writing career of the novelist Paul Gallico. The scrapbooks are arranged chronologically and by book/film with letters, telegrams, publicity materials, photographs and ephemera neatly intermingled with copies of reviews and reactions from local, national, and international press.