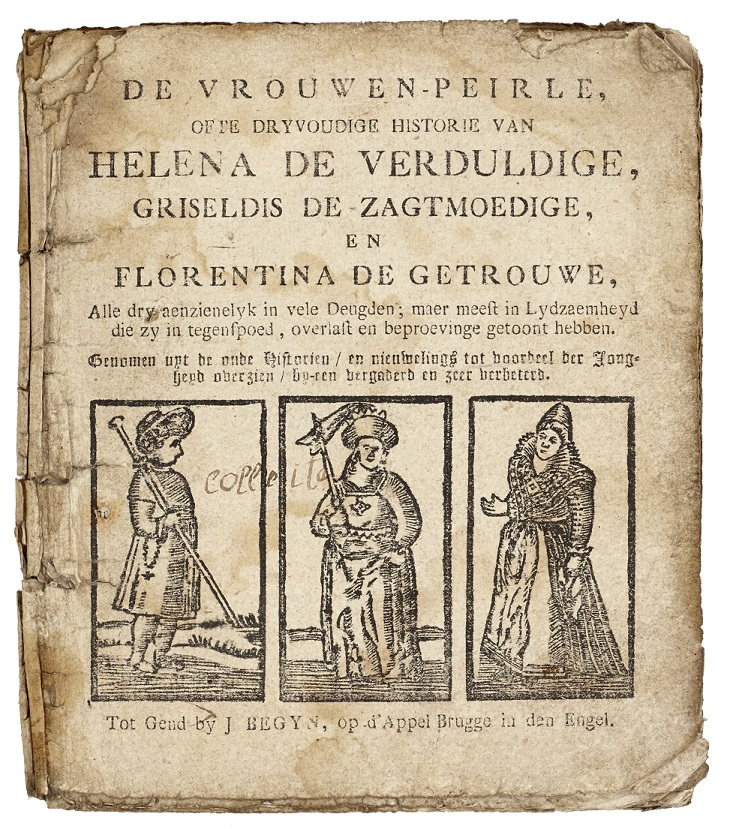 Three parts in one volume, 4to, ff. 56, with separate titles but continuous pagination; printed in Black letter in double column, titles with three full-figure woodcuts of female saints each, 13 woodcuts in text, including two of the title cut; part 1 with 5 small woodcuts within ornamental borders; dust-soiling throughout, edges somewhat frayed; disbound with evidence of the original sewing, and preserved in recent marbled boards; a contemporary woman’s ownership inscription (‘Collette’) on the first title.

An attractive copy of the ‘Women-pearls’, a Flemish chapbook portraying three remarkable women and their marvellous stories derived from Medieval romances. It went through numerous and mostly undated editions, alluring readers with the added, winning visual appeal of naïve-style woodcuts and archaic types.

The stories appeared first separately in the Northern Low Countries, and were later published in combined editions in the South. First up is Helena the Patient, the wife of King Henry of England and mother of Saint Martin of Tours. Her attribute is patience, and her story, apparently first told by the Norman poet Alexandre de Bernay, is one of lacerating loss and final reunion. Helena is followed by an even more patient Griseldis, prey to the sadistic and dubious humour of a heartless husbands: her tale was retold in various forms by Boccaccio, Petrarch, Chaucer and Perrault, and in the present version, adapted for school readings in the seventeenth century, the incest references are cleaned up. The unassailable virtue of the last heroine, Florentina the Faithful, is proven by the miraculously unsullied immaculate white (through scenes bathed in blood and mud) of her crusader husband’s shirt. Having frustrated the Sultan’s attempt to seduce her, Florentina sets off for the Orient to rescue her beloved spouse.