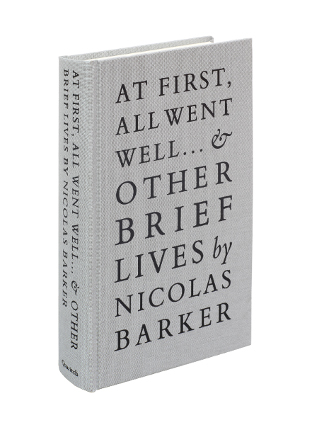 We are pleased to announce the publication of Nicolas Barker’s At First, All Went Well… & Other Brief Lives, a collection of eighty obituaries, written over a period of fifty years. The subjects are widely varied but united by a common dedication to the printed word and all that goes with it. They include printers, publishers, librarians, booksellers and book collectors, starting with C.H. Wilkinson and Sir Sydney Roberts in 1966, and ending with Barney Rosenthal (2017) and Ian Doyle in 2018. Among other names chronicled in between are Graham Pollard, Don McKenzie, Nicolete Gray, Mary Hyde, Bernard Breslauer, Justin Howes, Joe Tanner and Robert S Pirie.

Nicolas Barker has written on an extensive range of topics including medieval manuscripts, calligraphy, forgery, the book trade, typography, bibliophily and bookbinding. In 2013 Quaritch published Nicolas Barker at eighty: a list of his publications to mark his 80th birthday.

At First, All Went Well… is available at an introductory price of £35 until 31st August 2019. Please see here for further details.